When looking at the current situation in the Middle East, it is easy for anybody to get confused and feel lost. The wars in Syria and Iraq involve multiple actors including several neighbouring countries. The situation in Lebanon is getting more dramatic each day as the country struggles to keep its fragile peace while also dealing with over one million Syrian refugees. Likewise, a new conflict has torn apart Yemen, and relations between Iran and Saudi Arabia, the two dominant powers in the region (besides Israel) are at a new low-point, ever since Saudi Arabia executed a Shia religious leader and both countries cancelled their diplomatic relations.

The Kurds in the Middle East 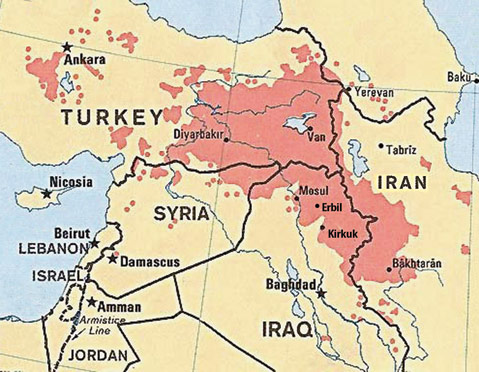 In Turkey, there are two major groupings, those supporting the Kurdish Workers’ Party (PKK) and those supporting the more moderate People’s Democratic Party (HDP). Both parties aim to increase the status of Kurds in Turkey, the PKK has promoted a violent struggle against the state, while the HDP is using elections and political campaigning for its message. Likewise, there are two main Kurdish groups in Iraq, the Kurdistan Democratic Party (KDP) and the Patriotic Union of Kurdistan (PUK). While both groups have been at war with each other in the past and have continued their struggle over control in Iraqi Kurdistan, the rise of the so-called Islamic State has forced them to work together. In Syria, the most dominant strand of the Kurdish people is united in the Kurdish Democratic Union Party (PYD), which has links to both the Kurdish parties in Iraq but also to the PKK in Turkey.

In Iraq, the Kurds have managed to secure a large degree of autonomy. They have their own region in Northern Iraq, which is politically and financially relatively independent from Bagdad.[i] While the Kurds in Iraq originally lost territory to the so-called Islamic State, they have more recently been able to gain territory. In light of the conflict in Iraq, the two Kurdish factions in Iraq have been forced to work together and have further strengthened their independence from Baghdad. Unlike the Kurds in Syria, they have also worked together with the Turkish government to prevent the PKK from using Iraqi-Kurdistan as a retreat. The Kurds in Iraq have recognised that it is unlikely that major international actors (most notably the United States, but also Turkey) will back the idea of an independent Kurdish state in the Middle East, and have since come to terms with their inclusion in a highly decentralised (and dysfunctional) Iraqi state, which has enabled them to exercise autonomy and indeed de-facto independence.

In Syria, the YPG and the PYD have become dominant actors within the Kurdish population and have been able to successfully organise the military resistance against the so-called Islamic state. Their defence of the Northern Syrian town of Kobane has given them international support and they have since been able to gain further military victories. However, more recently their military efforts have been hampered, because Turkey accuses the YPG of close cooperation and partnership with the PKK, and has used its own military to strike against YPG forces in Northern Syria. While the Iraqi and Syrian Kurds are united in their fight against the so-called Islamic State, they have otherwise very little in common. With the Iraq Kurds having already achieved a substantial amount of autonomy in the country through the creation of the Iraqi Kurdistan region, Syrian Kurds have had no previous autonomy. For them, the fight against the Islamists is also a fight for their future recognition in whatever Syrian state will emerge after the end of the civil war. It is therefore no surprise, that there have been reports on cooperation between Syrian Kurds and troops loyal to President Assad in their common fight against Islamic fundamentalists. For the Kurds in Syria, the current war in the country offers them the chance to consolidate their territory and make their voices for recognition and autonomy heard. This of course conflicts with the interests of Turkey. For Turkey it took years to accept the existence of an Iraqi Kurdish region and even that was only ensured through US pressure, but the current Turkish government has made it clear that it will not accept a Syrian Kurdistan region on its North-eastern border, especially when the Syrian Kurds are cooperating with the PKK.

The chances for a Kurdish state in the Middle East are very, very slim. That is despite the current turmoil and the possibility that the current conflicts in Syria and Iraq (and more widely in Yemen, the Israeli/Palestine conflict, the “cold” war between Iran and Saudi Arabia) will leave their mark on the region and might result in important regional and potentially even territorial changes. However, with new violence between Turkish Kurds and the army in Turkey, increased cooperation between the Iraqi Kurds and Turkey against the PKK and Turkish airstrikes against Kurdish troops in Syria, it becomes more and more obvious that Turkey will not tolerate the emergence of a Kurdish state. It is also unlikely that the USA or any other NATO member will support such an initiative. The Kurds have been an important ally for the USA and NATO, but the strategic relationship with Turkey, itself a member of NATO, will be more important for all sides. The only wild card is Russia, which has increased its cooperation with the Kurds in Syria. Russia does not recognise the YPG or the PKK as terrorist organisations, and since the cooling down of Russian-Turkish relations, there has been a revival of Russian-Kurdish relations. However, Russia’s interests in the Middle East, and particularly in Syria, are rather limited. It is mainly about forcing itself on the scene, getting Western governments to speak and cooperate with Russia (after the sanctions as a result of Russia’s annexation of Crimea) and pushing Russia’s status as a major player in global affairs. It is therefore unlikely that Russia will push its whole weight behind the demand for a Kurdish state, especially since this might upset other Russian allies in the region – President Assad and also the Iranian leadership.

Instead, what can be expected is that the Kurds of Syria might enjoy more autonomy once the conflict in the country has ended. This will be the case no matter who wins the conflict. Their demand for independence will, however only be successful if Syria completely falls apart as a country, something that is unlikely to happen. And even then it will be difficult for Syrian and Iraqi Kurds to find common ground, especially since Turkey has made it very clear that it will militarily oppose any move towards what could be perceived as a step into the direction of an independent Kurdish state.

The situation of the Kurds will remain problematic, in Turkey where the government started a dialogue but has now reverted to direct confrontation, in Syria where they are caught up in the civil war, in Iraq where they are part of the alliance against the so-called Islamic State but at the same time have to protect their autonomy, and in Iran, where Kurds also face discrimination. The Kurds remain a stateless nation in a region, in which the Western idea of the nation state has resulted in many conflicts in the recent past. Kurdish demands for self-determination will not go away. New forms of territorial autonomy and trans-border cooperation will need to be thought off in order to ensure the participation and self-determination of the Kurdish people into the countries where they live. That this can be done successfully has been proven in Iraq. There are, however, doubts about the willingness of the majority population in Turkey, Iran and Syria to grant extensive autonomy and trans-border cooperation rights to the Kurdish population.

* Dr Soeren Keil is Reader in Politics and International Relations at Canterbury Christ Church University in the United Kingdom. He is an expert on federalism and territorial autonomy as tools of conflict resolution, and has published extensively on political issues in the Western Balkans, EU enlargement policy and power-sharing theories.

He can be contacted at: soeren.keil@canterbury.ac.uk

[i] On the Kurds in Iraq see: Brendan O’Leary, John McGarry and Khaled Salih (Eds.): The Future of Kurdistan in Iraq, University of Pennsylvania Press 2005.

Soeren Keil is Reader in Politics and International Relations at Canterbury Christ Church University in the United Kingdom. He has held research and teaching positions at the University of Kent (UK), Universitat Pompeu Fabra (Spain), the University of Passau (Germany), Karl-Franzens University of Graz (Austria) and the Freie Universität Berlin (Germany). His research focuses on territorial autonomy in deeply divided societies, the Western Balkans, EU enlargement, and the foreign policy of new and small states.